C-19 Sucks. Not travelling sucks. Having my guys unhappy at home sucks. And I’m losing the battle to continue doing what we’ve been doing for the past 2 years.

At what point does my life, which will probably be shorter than average due to the shit I’ve seen and done over the years, need to continue on with occasional trips away?

I’m very close to booking a ticket and finding somewhere to go. England just legislated the removal of testing for folks flying in from abroad. Maybe I go there for a week just to see what the world is like beyond my own city?

If I don’t do something interesting soon, I’m going to lose my shit.

And this video might just be the motivation I needed.

But seriously, I’ve been wanting one of these Nomatic bags for some time now. They’ve got a serious sale going on, I’ll assume due to the old C-19, and it’s substantially discounted. If I pick one up, I’ll post my thoughts on it here.

Sly and I went to Canmore for a couple of days for a quick break out of the city. We had a pretty good time with a couple of stand out moments. I like bulleted lists; I’m going to use one now.

It truly was a great couple of days. Sly decorated the room for my birthday and I’m reminded of how much she makes me feel loved. That’s a good thing, right?

We’ve been together for 20 years in November and we know each other pretty well. Probably better than I’d prefer to admit though, so don’t tell her that if you see her. These sorts of occasions are over-rated, in my not so humble opinion. I’m forty-seven now. You think I’d start enjoying these things and forget about the past. Easy to say, hard to do.

Our hike was amazing and I’m reminded of how badly I’ve let myself go over the past ten years since I graduated from SAIT. Not to say I was some fine specimen of athleticism but that hike was tough. I spent most of the walk out of breath and moving slower than I’d like to admit. I did it but, much like my basic training and how badly out of shape I was when I went in, this was a mind over matter exercise. Also, not to self: if you stretch before you exert yourself, you might not be so sore the next day.

The hotel was OK. When we figured a getaway was in order, I checked a few different locations in Canmore and found this one to be having a deal for three nights for the price of two. Considering the place is around $300/night, I thought that was a steal. All in all it was OK and we’re actually considering visiting here again in December when it comes time for the Zaal Family Xmas getaway. Pretty sure we won’t be going to Vegas this year, which sucks more than I can adequately express. Anyway…

Something to remember about the Banff area is that they have two seasons: high and ski. Summer they get all manner of tourists with more money than cents (I’m so clever) who book up these hotels for the family in the range of $300 – $600 a night depending on the amenities and during the ski season the prices drop by two thirds.

Ours was their basic room with a king bedroom, fireplace and full kitchen. Nicely appointed, clean. Like I said, “OK”. Due to the C-19, rooms weren’t being serviced which wasn’t a terrible thing. Pool and deck area were being limited in capacity but it didn’t bother us. We’d much rather be out in the wild or sitting in front of our screens.

Growing up, my sister and I would spend summers with our Father, usually up in Edmonton or Jasper. As we grew older, we would work with our Father at whatever Greek owned restaurant he was employed at. We’d make some spending money and get some valuable service industry experience that would come into play, at least for me, later in my life.

This aside is simply because spending a few days in Canmore, the same ‘type’ of tourist town I spent my summers in, gave me the same ‘feeling’ I’d experienced when I was younger. Beautiful place to visit but holy shit, the visitors and the way they behave in that town was fucking ridiculous. And don’t even get me started on the prices for simple things like a soft drink. In short, I really miss spending time in the mountains AWAY from people. I’m going to make a point of trying to get out there more often, probably closer to the shoulder season when people are back home.

All in all, summer vacation 2020 was not what we wanted but we were together and I think that’s really all that matters.

Enjoying time in Vegas must always include culinary experiences. Usually it’s to try something that you’ve never had before but many times it’s all about going back somewhere that fed you something outstanding or where you had a truly enjoyable experience.

An article in the LA Times talks about one of the little known culinary attractions that continues to bring people to the oyster bars all over Vegas. Though I didn’t know how widespread ‘Pan Roasts’ are, I do also have a favourite haunt to visit that gives me access to something similar. And even in some of the other resorts I don’t regularly visit (the Palace Station mentioned below, for example) they have a pan roast available that draws the folks in.

I usually make a point of visiting The Orleans, just west of my usual strip hotel, The Excalibur, on each trip that I make. Within it’s gloriously overdone Mardi Gras theming, you’ll find Big Al’s Oyster Bar, home to my favorite dish there, the Crab and Shrimp Boil.

This is a great meal to enjoy while you visit the resort. I’m usually in between playing blackjack and heading to the theatre for a movie or the bowling alley to knock down a few pins when I decide to make a stop. Bowl of beautiful broth filled to the brim with shrimp and crab, corn and potatoes, it’s truly a thing to behold. It comes to you so hot that you’ll need to give it a few minutes before you dig in or risk a scalded mouth. What I didn’t actually know before reading the article is what a pan roast is and why I need to try one. There’s one listed on the menu at Big Al’s but I’ve just never gotten past the crab and shrimp boil to see it.

I’ve got a whole ridiculous list of things that keeps me coming back to Vegas, both solo and with the dear wife, but one thing that never gets removed is trying the awesome food and beverage that’s available a reasonable prices as soon as you get off the strip. The same is available on the strip but at a much different price and experience.

The next time I stop by, which will be in October on my next trip to Vegas, I’m definitely going to be trying one of these and I’ll report back. I think this next trip might be my chance to document more of what I love from that city, while it’s happening! We’ll see if I can remember to document during the trip. 😀

This one is my favourite picture from last year; my wife enjoying a frozen Mickey and looking wistfully skyward!

Sly and I were going through some of our previous vacation photos and laughed a lot. Thought I would post a picture a day until we leave next week.

Here’s me being a drunken pirate on our Disney Cruise. 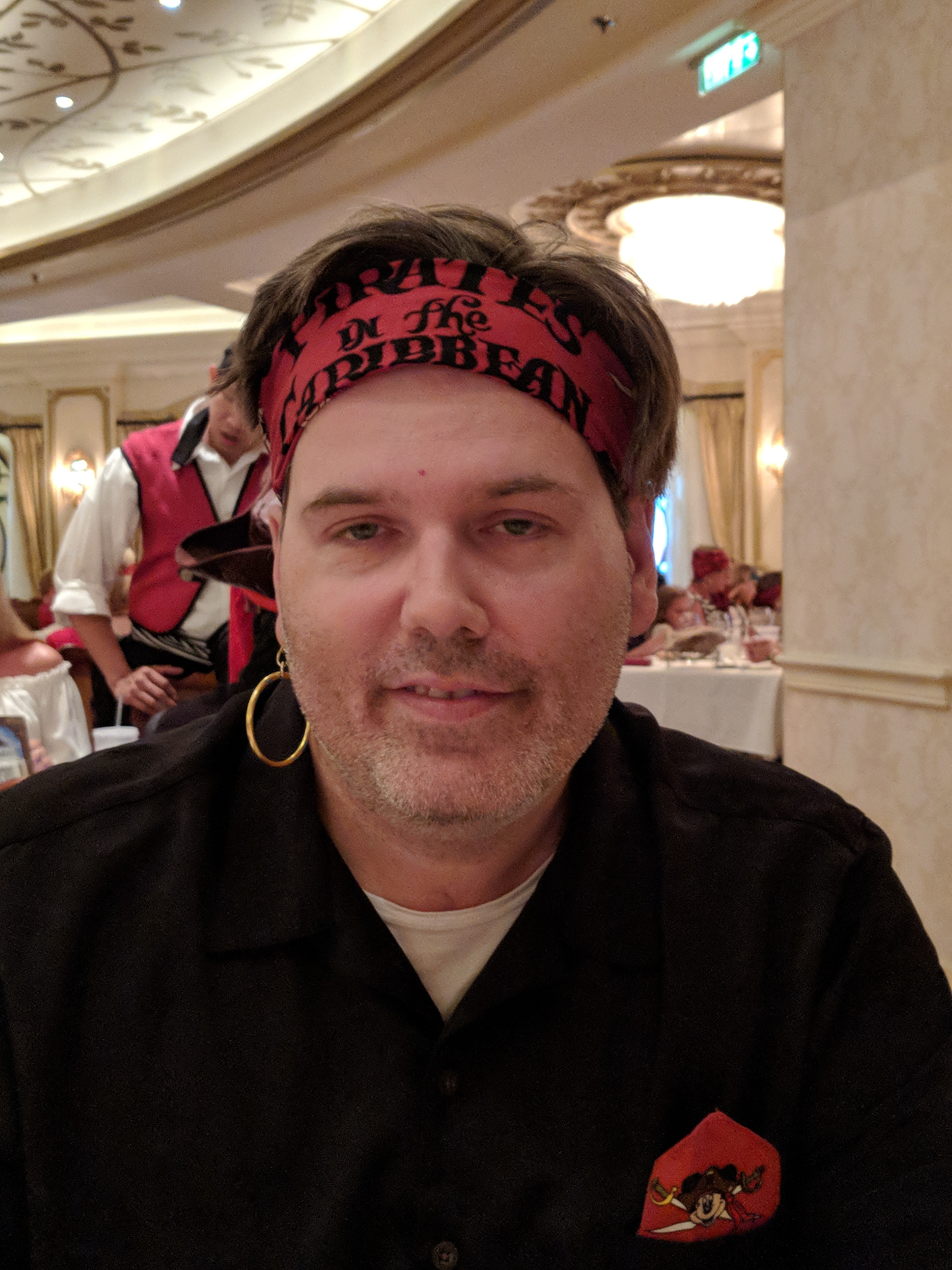 I’ve been absolute shite about keeping this up to date but I’ve got an update that I think needs sharing somewhere off the ‘social’ media’.

I’m headed to Vegas tomorrow for CES. This will be my third year attending but this year is a little different: I’ve joined the Canadian Delegation to represent SAIT (and Alberta/Canada) at the show on behalf of Applied Research. Myself and Emerson Burns (see our Bios here) will be at the show and at the Canadian Pavillion manning a booth for a bit of time. I’ve embedded a map below in case anyone might be interested. Blue pin, top left is where we’ll be for a couple days during the show.

The combination of fear and exhilaration is astounding; something that I’ve seen innate value in for the past two years finally becoming something we might use as a vehicle into more potential projects.

I hope I don’t fuck this up, I hope that we can derive some real value out of this and that it turns into something we contribute to on an annual basis. I hope this is something that I can build off of and develop new streams of potential project partners, close to home and abroad.

Don’t expect a ‘Facebook dump’ of selfies and activities while we’re away; I think my boss wants to hedge a bit and see how this trade mission goes before announcing our participation to stakeholders that might look down their nose at two ARIS employees being sent to Nevada simply because of the location without considering the value of the mission. Though when the weekend starts and the pressure has lessened you might get a couple of photos posted of Emerson and I blowing off some steam.

This was a perfect day and I’m looking forward to tomorrow. Though we’re not really planning anything, a visit to the North Outlet Shoppes and a late lunch at Pizza Rock are on the agenda. Hopefully I’ll get a chance to spend some time at a table if I can find something for Sly to get up to. 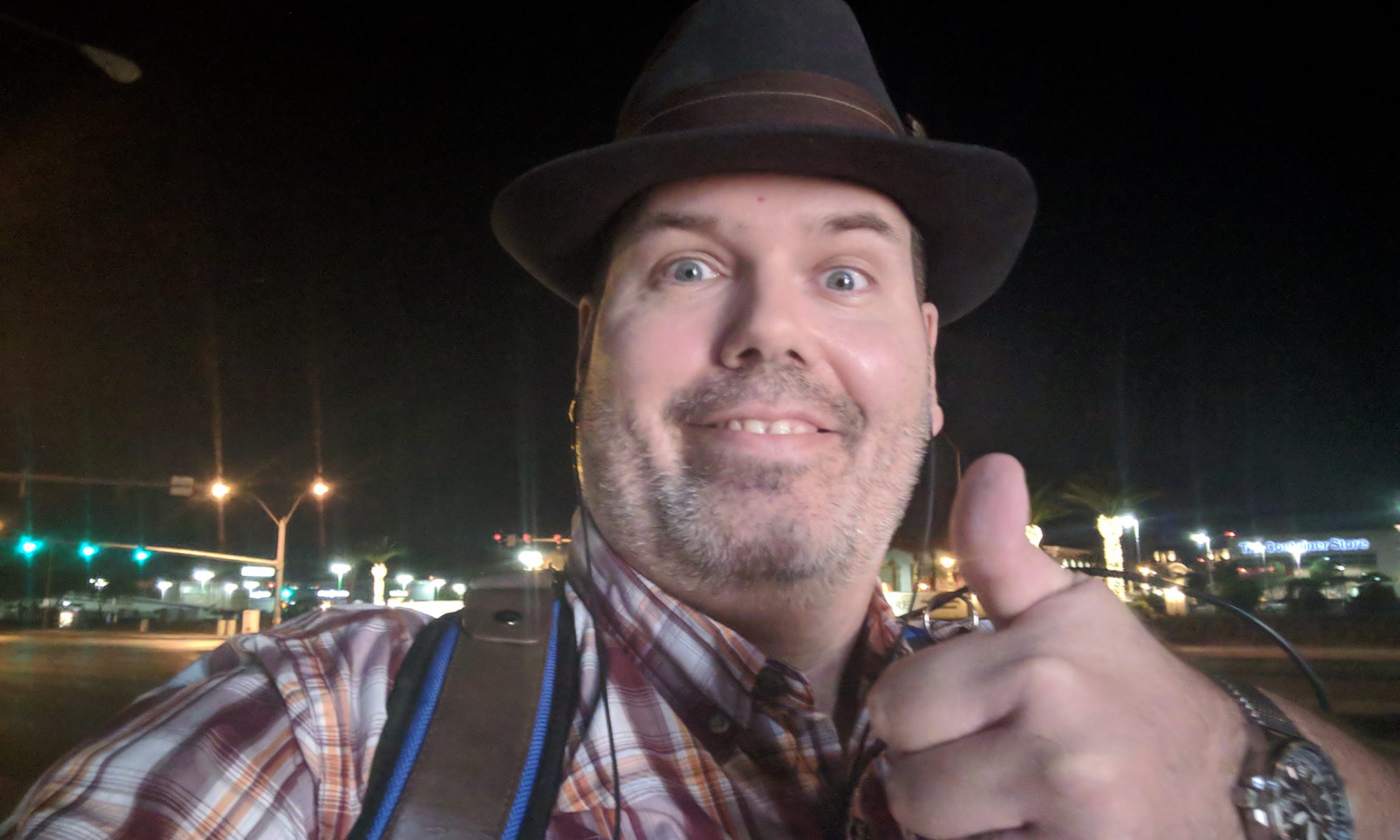 Do you know where your Zaal is?